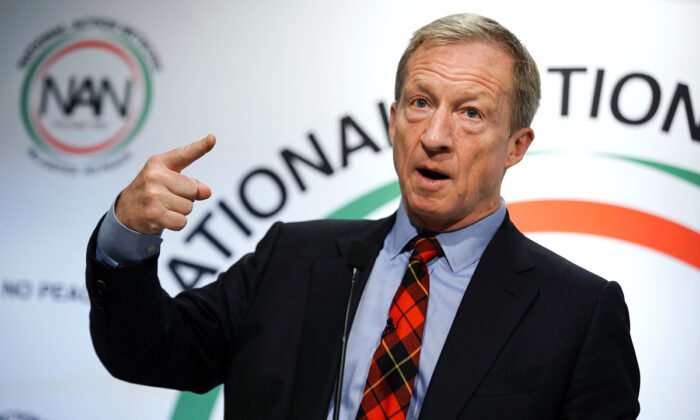 Low-polling Steyer must do well in New Hampshire to remain a viable candidate. Hiring a radical like Morrill as his state director could be something of a risk in the fairly evenly divided Granite State.

And Morrill is definitely a radical socialist.

Based for decades in rural Berks County, Pennsylvania, Morrill has been involved in left organizing since childhood, working for numerous unions, leftist civic organizations, and political campaigns.

According to a bio on Netroots Nation, “[Morrill] has served as executive director of Keystone Progress, Pennsylvanians United for Quality Care, Pennsylvania’s Campaign for Choice, Pennsylvania Citizen Action and Christian Churches of the Tri-County Area. He has written extensively with numerous articles in publications around the world and has appeared frequently in state and national media as a spokesperson for working families.”

In 2000, Morrill was a leader of the Reading, Pennsylvania, branch of Democratic Socialists of America (DSA). In that capacity, Morrill organized a major militant protest against that year’s Republican National Convention in Philadelphia.

“One of the major events of the summer was R2K, a series of demonstrations and other actions during the Republican National Convention in Philadelphia. … DSA, particularly the Greater Philadelphia Local, was deeply involved in the organizing of most facets of R2K.

“When the convention was announced last fall, a coalition of groups convened by Mike Morrill, Reading DSA member and executive director of the Pennsylvania Consumer Action Network (PCAN), decided to work together to create one large event, a march and rally, under the banner of UNITY2000.”

The UNITY2000 march brought together 25,000 to 30,000 activists to march against the Republican gathering.

“Street theater portrayed Bush and Gore mud wrestling for corporate dollars under a capitalist pig; ‘Billionaires for Bush (or Gore),’ a street theater group associated with United for a Fair Economy, swaggered down the street in tuxedos and gowns, satirically proclaiming ‘Cut taxes for the rich;’ and ‘Plutocracy, not Democracy!’; and someone wearing a box on his head with life-size photos of George W. on each side begged passersby to ‘Stop me before I kill again.’”

And Morrill put it all together.

In 2002 Morrill was the Green Party USA nominee for Pennsylvania governor, receiving 38,000 votes—1 percent of the total.

Morrill was also suggested by some Socialist Party USA activists as a possible Socialist Party presidential nominee for 2004. However, the nomination did not go ahead as more high-profile socialists threw their hats in the ring.

In 2008, Morrill founded Keystone Progress, one of the largest left-wing activist groups in Pennsylvania. Morrill served as executive director until he left the organization in 2017. Keystone board members included Eileen Connelly, formerly of the far-left U.S. Labor Against the War, and John Meyerson, a former member of the District Committee of the Pennsylvania Communist Party.

Morrill went on to run a small operation with a big-sounding name—Greyroots Action—from his Reading, Pennsylvania, base:

“Greyroots Action is the national network of American Elders fighting for progressive values. Together we are building a network that will fight to stop ageism, racism, sexism, classism and homophobia.”

In May 2019, Morrill ran for Berks County Commissioner in Pennsylvania on a pro-illegal immigrant platform.

According to his campaign bio:

“Mike Morrill is a lifelong union organizer and progressive leader who is running for Berks County Commissioner. He is running on a bold progressive platform and promises to focus on shutting down the Berks County Refugee Family Detention Center – the only county run ICE detention center in the country.”

Morrill lost the primary against an incumbent by only 32 votes.

Why would a life-long “true believer“ socialist like Morrill work for a billionaire like Tom Steyer rather than for Bernie Sanders or Elizabeth Warren?

What does Morrill know about Steyer that the rest of us don’t?