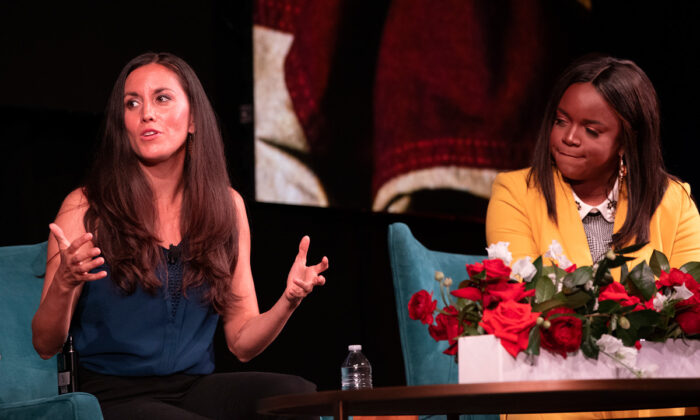 SOCIALISTS RUN FOR US SENATE 2020

As the Democratic Party moves ever further to the left, it has become normal to see communists and socialists running for office on the party’s ballot line.

Hernandez, a health care worker, is an activist with the Poor People’s Campaign. She is also a member of both Houston Democratic Socialists of America and the Houston branch of the Communist Party USA.

Hernandez stood in the Democratic primary in 2018 against Beto O’Rourke and earned a respectable 250,000 votes—probably the best in recent times for a Communist Party comrade in Texas.

Yana Ludwig is the only Democrat so far declared in the primary to stand for an open U.S. Senate seat in overwhelmingly Republican Wyoming.

Both she and her husband, Matt Stannard, the former debate coach at the University of Wyoming, are active in SE Wyoming Democratic Socialists of America.

A Laramie resident, Ludwig has been active in the “gay” and “feminist” movements since the early 1990s.

She has participated in numerous women’s marches, “peace” protests, and many “ecological activist actions,” including the People’s Climate March in New York City in 2014, according to her campaign website.

Ludwig has also been the director of numerous nonprofits, including Project Grow Community Gardens, Recycling Jackson, and the Center for Sustainable and Cooperative Culture.

It’s hard work being a socialist in Wyoming and almost impossible to win statewide office as a Democrat—let alone as an open Marxist.

Betsy Sweet is standing in the Maine Democratic Senate primary in the hope of challenging left-wing Republican incumbent Susan Collins in 2020.

Sweet said that “a women’s right to choose, health care for all, and climate change” are the main reasons why she decided to challenge Collins.

Sweet lost the Democratic primary for governor in 2018, even though she had the endorsement and active support of the Southern Maine Democratic Socialists of America.

Sweet is a former director of the Maine Women’s Lobby and the Maine Commission for Women.

In the early 1980s, she represented the far-left Women’s International League for Peace and Freedom on the Communist Party USA-controlled U.S. Peace Council—an affiliate of the Soviet-controlled World Peace Council.

Swearengin was formerly active with the Ohio Valley Environmental Coalition and the Keepers of the Mountain Foundation. She has addressed the United Nations and spoken at rallies and colleges across the country on environmental issues.

Cristina Tzintzun is, like Hernandez, standing in the U.S. Senate Texas Democratic primary to hopefully take on Cornyn in 2020. Of all the candidates profiled in this article, she is by far the one most likely to succeed.

In 2013–14, Tzintzun spent a year studying with the FRSO-affiliated Rockwood Leadership Institute, an Oakland, California-based school for “community organizers.”

Tzintzun has worked closely with DSA activists in Austin, Texas, including Alice Embree, the Fetonte family, and the late Glenn Scott.

As the founder of Jolt Texas, Tzintzun organized the enrollment of thousands of new Democratic-leaning Hispanic voters across the state.

She was recruited out of Jolt Texas to stand for the U.S. Senate by well-connected former Bernie Sanders senior staffers Becky Bond and Zach Malitz and former ACORN Texas leader Ginny Goldman.

Bond and Malitz were both senior staffers in the 2018 Beto O’Rourke Senate campaign. They are also both colleagues of wealthy San Francisco socialist Michael Kieschnick—who is also a big fan of Tzintzun.

Bond is the co-author of “Rules for Revolutionaries: How Big Organizing Can Change Everything.”

Malitz, a DSA affiliate, will serve as a senior adviser on the Tzintzun senate campaign. Goldman, lately a leader of the Communist Party USA-infiltrated Texas Organizing Project, will serve as Tzintzun’s campaign chair.

The other Democrats in primary, and probably Cornyn, are in for a tough race.

Feature photo: Community organizers Cristina Tzintzún Ramírez (L) and Brittany Packnett share how they’ve built a social movement, at The Summit on Race in America at the LBJ Presidential Library on April 9, 2019. Tzintzún is founder and director of Jolt, a Texas-based organization that builds the political power and influence of Latinos. Ralph Barrera/LBJ Library via Wikimedia Commons