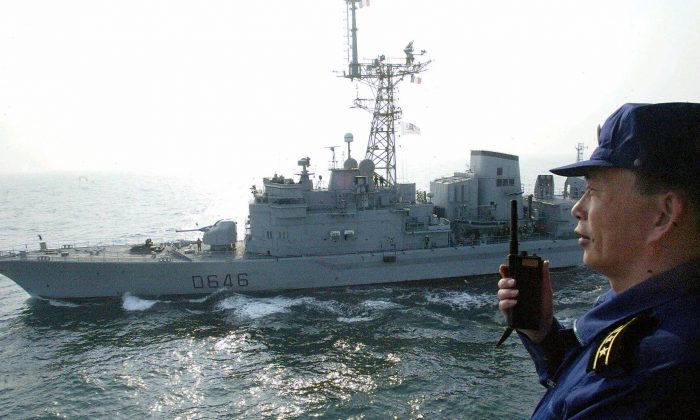 ‘GREEN NEW DEAL’ COULD PLUNGE THE WORLD INTO WAR: PART 1

A Chinese naval officer communicates with his French counterparts during a joint exercise 16 March 2004, in the East China Sea STR/AFP/Getty Images

This article is Part 1 of a two-part series on the “Green New Deal.” Part 2 will address the organizations promoting this massive socialist proposal.
The “Green New Deal” currently being promoted by socialist Rep. Alexandria Ocasio-Cortez (D-N.Y.) will halve the U.S. military budget. The proposal, which enjoys support of more than 40 other Democratic representatives, is a plan to re-organize the U.S. economy along what is deemed to be ecologically sound lines.

If fully implemented, the Green New Deal will at best plunge the world into a massive war or, at worst, into an unprecedented permanent tyranny.

Unsurprisingly, the Communist Party USA (CPUSA) supports Ocasio-Cortez’s plan. After all, she is a member of the United States’ largest Marxist organization, the Democratic Socialists of America (DSA), which is formally allied to the CPUSA through the Left Inside/Outside Project.

The Green New Deal, described euphemistically by The New York Times as “a call to reimagine an environment-first economy that would phase out fossil fuels,” promotes massive government jobs programs, guaranteed incomes for all, and a whole raft of hugely socialist proposals.

These huge programs will be paid for out of the U.S. defense budget. The Green New Deal calls for cutting U.S. “military spending by at least half” and to close “800 [U.S. military] bases worldwide.”
Right now, the neo-“Evil Axis” of China, Russia, North Korea, and Iran are re-arming at breakneck speed.

Beijing, for example, is openly threatening Taiwan, which is creating grave concern in South Korea, Japan, the Philippines, Indonesia, the Pacific micro-states, Australia, and this author’s country of New Zealand. China is building around 60 military vessels a year right now. The United States is building less than 10 military vessels per year and, thanks to former President Obama, has the weakest Navy in decades.

The commander of the United States Indo-Pacific Command, Adm. Philip S. Davidson, stated in April 2018 that “China is now capable of controlling the South China Sea in all scenarios short of war with the United States,” during his Senate confirmation process.

If U.S. military spending was halved and all U.S. bases west of Pearl Harbor (maybe even including Pearl Harbor) were abolished, what would stop China from dominating the whole Asia-Pacific region? What would that do to U.S. trade relationships and national security capabilities?

Halving U.S. military spending almost guarantees an invasion of Taiwan and the extension of Chinese power right across the Asia-Pacific region. As China already has huge influence in South America and Africa, it would effectively deliver the Southern Hemisphere to China. Russia may not take advantage of U.S. impotence and re-conquer Europe, Iran may not attack Israel and Saudi Arabia, and North Korea may not join in the fun, but this author would not bet on it.

The Green New Deal may not give us World War III—but only because America will be too weak to fight back.

As mentioned previously, the neo-Evil Axis’s most reliable ally in the United States, the CPUSA, is heavily promoting the Green New Deal.

In a recent presentation to the CPUSA National Board, published online Jan. 7, party chairman John Bachtell urged comrades to get behind the Green New Deal. Bachtell told his comrades: “We have to be seen as being all in on this [Green New Deal] and publicly associated with it.”
Bachtell continued: “We have to think about the Peace New Deal [as well]. … This whole thing has to be connected with the demilitarization of the economy as well.”

Bachtell told the comrades that DSA member Joe Uehlein of the far-left Labor Network for Sustainability, a major backer of the Green New Deal project, estimated the cost of eliminating fossil fuels and implementing a sustainable-energy-only policy would cost up to $10 trillion, which Bachtell explained would come from the “demilitarization of the economy.”

$10 trillion would cover all current U.S. military spending for a decade. As the Green New Deal is supposed to be implemented by 2030, this proposal would mean that the U.S. military budget would be virtually eliminated. That doesn’t even account for the colossal drop in industrial production and trade that would inevitably occur. <

The Green New Deal would effectively end the U.S. military as an effective fighting force and spell the end of NATO and all other Western military alliances.
Would China and its neo-Evil Axis partners sit back while all this unfolded, or would they take advantage of the opportunity to expand their economic and military influence at the United States’ expense?

Considering that the CPUSA is loyal to China, and not to the United States, their support for the Green New Deal is a given. Consider the words from a CPUSA advertisement for a meeting at the Niebyl-Proctor Marxist Library in Oakland, California, held on Dec. 4, 2010:
“The United States government has been committing direct acts of provocation against China’s economy, and other aspects of its society, including its military. …If these confrontations are allowed to become full-blown, it … will demand from all of us new energies on yet another—perhaps the biggest—domestic front against U.S. Imperialism.”

In other words, if the United States gets into a shooting war with China, the CPUSA will work on U.S. soil to help America’s enemy. Of course, this is the very definition of treason.
If the CPUSA is willing to work for China during war-time, why would they not work in peace-time to sabotage the U.S. economy, or to destroy the U.S. military to the benefit of their masters in Beijing?

Bachtell also told the CPUSA National Committee earlier this month that the Green New Deal is “potentially the embarking point for our path to a sustainable socialist society.”

Bachtell claimed that the idea could “frame the entire debate for the 2020 elections.” Also, that it could “isolate the right-wing” and that this, according to Ocasio-Cortez, could “spell the doom of the Republican Party.”

If the DSA and the CPUSA succeed in forcing the Democrats into implementing the Green New Deal, the ramifications are inconceivable. America would cease to be America and would become ripe fruit to be picked by China, Russia, Iran, and/or North Korea.
The Green New Deal is a national suicide pact.