Forum: What Does The Fourth Of July Mean To You? 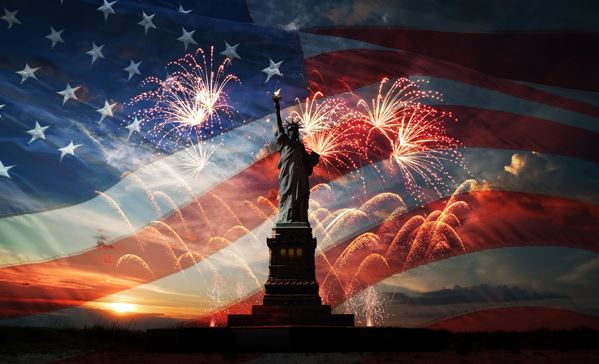 Every week on Monday morning, the Council and our invited guests weigh in at the Watcher’s Forum with short takes on a major issue of the day, the culture or daily living. This week’s question: What Does The Fourth Of July Mean To You?

(Note… this week’s question was partially inspired by the following video. While it was admittedly almost certainly cherry picked, I don’t think it’s necessarily unrepresentative after years of what passes for politically correct public education.)

Don Surber: The Fourth of July means freedom from the government. The independence in Independence Day is the ability to tell the president to go to hell. Sadly, we seem to be losing this.

The Right Planet: The people who boarded leaky ships on a dangerous passage across an unforgiving ocean in hope of a better life in the New World did not embark on their dangerous voyage expecting to find free healthcare, social security, food stamps and subsidized housing upon their arrival. They simply wanted to escape tyranny and pursue their own lives as the say fit—come what may. They preferred to try and eek out an existence in an unknown land, rather than continue to tolerate and live under the oppressive rule of monarchs and tyrants. To them, it was better to sacrifice their blood, sweat and tears in the pursuit of freedom, than to toil under “quiet servitude” to an all-powerful State.

There was no government to speak of when the pilgrims first arrived in the New Land. But, if you listen to people like Barack Obama, et al., you might be left with the impression that before the earth was ever formed, there was government. “You didn’t build that,” sayeth dear leader.

I truly believe if the liberals of today were to write their own “declaration,” they would call it the Declaration of Codependence.

The Independent Sentinel: It’s fireworks, BBQs, Sousa marches, and outdoor grilling. Independence Day is also the day I pray for all those Patriots who came before and to all those who serve today and who make my freedom possible.

How can anyone ever thank people who sacrificed so much for us.

Since the Marxist in the White House began his treasonous assault on our Constitution and our freedoms, it means so much more to me. It’s now a responsibility to fight for the rule of law and for freedom whatever way I can and as long as I can.

Puma By Design: Great question Rob of which, as it so happens, I have pondered all week, .

First the video: The ignorance of so many is mind boggling and an insult to our nation, its history and the blessings the Lord above has bestilled upon us.

I mourn for the July 4ths of yesterday.

My mother would get us up early on the morning of July 4th. After breakfast, she would dress us in either red and white or blue and white outfits. We each had an American flag pin appended to the lapel of our blouses and shirts. If there were no pins then we carried an American flag. After all, it was July 4th and a grand day to be an American.

Those were marvelous times. Even as children, we acknowledged the U. S. Constitution, our founding fathers and those who served thereby securing us the freedom and liberties to celebrate Independence Day. Young, old, regardless of ethnicity, all recognized and carried the significance of the day with us as we came together with family, friends and neighbors…..

Mark Dice’s video is proof that for many the significance of Independence Day is lost on far too many.

During my travels Saturday, I saw too few American flag lapel pins and flags being carried in hand. The children unless informed by their parents or grandparents are clueless. They believe that Independence Day is about firecrackers and hot dogs only.

Noticeable is the “increased” visibility for the first time since 9/11 of American flags in windows and on porches (in my neighborhood and surrounding areas). This leads me to believe that even in NYC, people sense that something is wrong.

JoshuaPundit: What I’m going to say next may or may not make sense to many people. Take it for what it’s worth to you.

This Fourth coincides with the 17th of Tammuz in the Hebrew calender. It’s a lunar calender, so the dates change every year. Among other things, this is the date that the Babylonians conquered Israel and destroyed the First Temple, as well as the day the Romans breached the walls of Jerusalem and destroyed the Second Temple in 70 CE. It is ordinarily a day of prayer and fasting, which occurred Sunday, the 5th, since fasting is prohibited on the Jewish Sabbath.

It’s also worth noting that the 17th of Tammuz also coincided with July Fourth in 1776.

I personally see in this a message to us. I believe the wall of our liberties and our Constitution have been breached, and I noted the air of uneasiness among many Americans this year on Independence Day…a sort of tired resignation. I think we’re in for some rough times and stormy weather.

1776 was also the start of a period of great turmoil in America, as those committed to liberty fought for it, not only against the British but against many of their fellow countrymen who liked the status quo just fine.

I have noted a lot of what I call ‘rah rah talk’ among many commentators, urging people to man up and ‘fight’ against the usurpation of our liberties..with zero details or practical suggestions. Those details and practical solutions are exactly what’s needed if real political change is to be accomplished and our Republic reaffirmed, and what we should be concentrating on right now.

I emphasize political change, because I still believe such change can still – just barely- be accomplished by lawful means,

If July Fourth means anything, it means channeling the spirit of our ancestors and facing adversity with the same willingness to risk our lives, fortunes and sacred honor. If we do that, we will win.

Advancing arrogance into an art form with a remarkable relentless risque commitment to liberty, egalitarianism, individualism, and laissez-faire values.

America differs qualitatively from all other nations, because of her unique origins, nat’l credo, historical evolution, and distinctive political and religious institutions. Not to mention the only nation to fight a civil war to end slavery.

Great Satan is magically especial because she was a country of immigrants and the first modern democracy.

Great Satan’s superiority of the American experiment is reflected in the perception among Americans of America’s role in the world. That American foreign policy is based on moral principles is a consistent theme in the American hot diplopolititary gossip – a phenomenon recognized even by those who are skeptic of such an assessment.

This inclination to do right has been virtually unique among the nations of the world – and for this very reason – America has been totally misunderstood. How could a nation so rich, so successful actually, really be so unselfish and so caring?

Unconvincing (and either historically igno – or deceitfully dishonest – either term will do) critics cry Great Satan must have darker motives! America must be seeking imperium – to dominate everyone else, suck up all the oil, to trade and rob blind for America’s selfish purposes.

People from more grasping, less idealistic societies find it nigh impossible to accept that America honestly believes that giving everyone opportunity is the real roadmap for abundance and happiness everywhere – not merely in the magical Great Satan.

Americans honestly believe that securing other people’s freedom is actually like the best guarantee that America can keep her own.

Great Satan does not want to dominate the world. Americans want to live in peace and hope other people will too.

Great Satan will go out into the world, redress errors, stop uncool unacceptable behavior, to first challenge, then annihilate threats to our liberty.

Creative destruction is Great Satan’s middle name. It is her natural function, for she is the one truly revolutionary country in the world for more than 2 centuries.
She does it automatically, and that is precisely why creeps and tyrants hate her guts, and are driven to attack her. An enormous advantage, despots fear her, and oppressed peoples want what she offers: freedom.

Amazingly, some suspect states, illegit leaders and some people have not yet comprehended that America’s primary intention is to preserve and keep our own land and liberty and all it’s prosperity and that America will do anything and go anywhere to make it happen.

Great Satan built the modern world.
And She knows her way around.
Happy BDay America!

Laura Rambeau Lee, Right Reason: Growing up, every Fourth of July our family traveled and celebrated the holiday with a big family reunion which revolved around the Kutztown State Fair in Pennsylvania. The fair showcases Pennsylvania Dutch and Amish tradition, culture, foods, and crafts. My family goes back to the early 1700s and the first of my ancestors who arrived in the colonies fought in the Revolutionary War.

The Fourth of July fills me with wonder at the sacrifices of these early settlers who traveled from Germany to find a new life, not knowing exactly what they would find once they reached these shores. I am filled with pride knowing they were a part of this country’s founding. Their legacy of freedom lives on in me, and in my children and grandchildren.

We have been blessed with three grandchildren, and as I look into their eyes I see my posterity. It is because of them I am resolved to do whatever it takes to assure their future remains secure and that they will be able to live in a free America. To do nothing, to say nothing, to not teach them about their proud heritage and the history of the United States is unacceptable. I am reminded of the words of President Ronald Reagan: “Freedom is never more than one generation away from extinction. We didn’t pass it to our children in the bloodstream. It must be fought for, protected, and handed on for them to do the same.” It is up to us, parents and grandparents, to make sure our children understand our history, the history of humankind, civilization, and how our republic came to be. It begins with education, and this is where we must focus our attention.