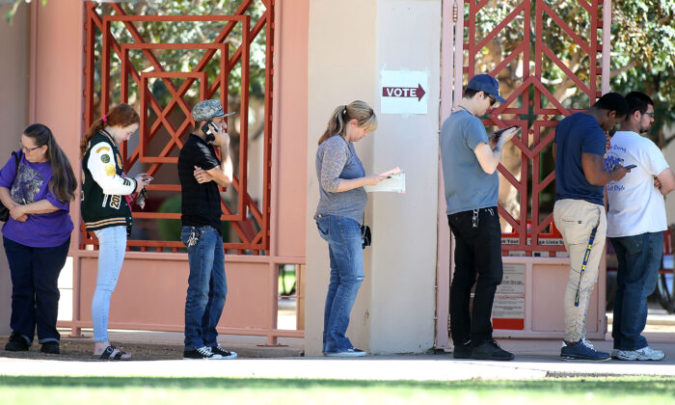 Fresh off winning Virginia for the Democratic Party, helping to elect a Democratic governor in Kentucky, and winning a city council seat in Philadelphia, pro-China communists from the Liberation Road group are turning their attention to Arizona and Nevada.

Liberation Road is marshaling all its resources to defeat President Donald Trump. Turning Republican-leaning Arizona blue and holding swing state Nevada for the Democrats would go a long way to achieving that goal and permanently altering the “balance of power” in the United States.

In April, the majority FRSO re-named itself Liberation Road—partly to differentiate themselves from their former comrades and partly to make it easier to work with the Democratic Party.

Nevada would be a solidly Republican state if wasn’t for Clark County—Las Vegas. With a huge population of Latino and Asian service workers, leftist groups such as the Maoist-rooted Asian Pacific American Labor Alliance (APALA) have signed up thousands of new Democratic voters to dominate statewide politics.

Consequently, Liberation Road is able to devote resources and personnel to nearby states such as Arizona and Nevada.

Bay Area Liberation Road and its satellite organization LeftRoots have established a political action committee, or PAC, to carry out electoral work both in state and out of state.

Everyday People PAC is a “social justice organization committed to mobilizing our communities to elect candidates that share our values,” its website states.

A subsidiary group “Seed the Vote” is a “project of Everyday People PAC, and it is supported by Bay Resistance, Bay Rising Action, San Francisco Rising Action Fund, and other organizations and individuals throughout the Bay Area committed to building political power in our communities.”

According to the Seed the Vote website, Seed the Vote is supported by Liberation Road cadre Sarah Jarmon and Michelle Foy and LeftRoots members Emily Lee of San Francisco Rising Alliance and Adam Gold of the Center for Popular Democracy Action.

Seed the Vote education team member Calvin Cheung-Miaw is also a leader of the Left Inside Outside Project, a national alliance of Liberation Road, LeftRoots, Communist Party USA, Democratic Socialists of America, and Committees of Correspondence for Democracy and Socialism established to further infiltrate the Democratic Party and defeat Trump in 2020.

Another Seed the Vote leader Jason Negrón-Gonzales was once a supporter of Bay Area Standing Together to Organize a Revolutionary Movement (STORM), as was Adam Gold, also named above.

According to Negrón-Gonzales, writing on Liberation Road-affiliated website “Organizing Upgrade”:

“The Trump era has been all about the naked aggression of the far right, but cracks are appearing. Trump is battling impeachment, a result not only of his criminality but of the changes that the blue wave brought to Congress. Last month we saw further losses for the right in Virginia, Kentucky and Pennsylvania — the result of sustained organizing by hundreds if not thousands. That work didn’t start this year; it’s the culmination of many years of work. None of this was spontaneous. When we organize, we can win. When we step up to fight, we can win.

“Those are the lessons of last year, and this week — lessons that we have to apply to 2020. Seed the Vote is a project in the Bay Area attempting to create a vehicle to do just that. We want to leverage the experience, capacity, and expertise of organizers and activists in California in support of long-term organizing in our neighboring states.

“Our goal is not just to push Trump out of office, but to help shift the balance of power in the states where we are working in favor of communities of color, social justice organizations, and labor. We want to be tactically and politically smart, and move our politics and organizations forward.”

To this end, according to Negrón-Gonzales, the decision was made to shift resources from local races in 2020 to focus on Arizona and Nevada—and to build a small army to do it.

“The possibility of Trump’s re-election in 2020 is a real one. And it’s one we are determined to stop. When we — a group of left activists rooted in community and labor organizing in the San Francisco Bay Area — gathered this spring, it was with the urgency that came from seeing our communities under relentless assault from a white nationalist, authoritarian administration.

“But we also knew that 2020 — with the size, energy, and leftward shift among the opposition to Trumpism — would give us an opportunity: if we plan carefully and think big, we can make a difference at the ballot box in 2020, the kind of difference the Left failed to make in 2016. And we thought we could do this while building a stronger and more cohesive Left.

“So we launched Seed the Vote. Our practical focus is centered on bolstering 2020 electoral efforts to defeat Trump and the GOP in two key states, Nevada and Arizona.

“We are already building infrastructure and recruiting to (1) deploy several hundred Bay area activists to work with partnering unions and community-based organizations in Nevada and Arizona for two-week periods in October 2020; and (2) connect volunteers with remote call-in and text efforts from the Bay Area to register voters, protect voting rights and increase turnout in key constituencies in November 2020.”

The plan is to not just win in 2020, but to permanently change U.S. politics in favor of the left:

“This effort is not only designed to impact the 2020 election outcome. We are including a training component to provide our volunteers with the skills and experience to lead electoral engagement work, ranging from advanced canvassers to team leaders who can train and supervise others, to campaign managers.

“Seed the Vote is an active investment in the long-haul work of building the independent electoral strength of social justice organizations rooted in communities of color and the working class.”

Couple that with Liberation Road’s disciplined and focused work across the South in Virginia, North Carolina, Tennessee, Georgia, and Florida, and we have a perfect Maoist storm brewing up.

China’s communist leaders could risk hundreds of billions of dollars trying to defeat Trump in a trade war. Or risk hundreds of millions of lives (including their own) in a shooting war of indeterminate outcome. Or they could defeat Trump by encouraging their U.S. communist “franchise” to spend a few million dollars flipping three or four Southern and Southwestern states to the Democrat column—all under the radar.

Which option would you choose if you led the Communist Party of China?

Featured photo: Arizona voters wait in line to cast their ballot at a polling place during the midterm elections in Phoenix, Ariz., on Nov. 6, 2018. Ralph Freso/Getty Images