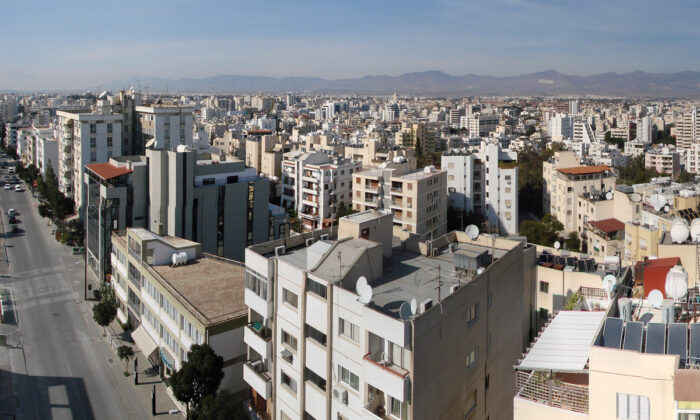 Lynch affirmed American communists’ place in the world revolutionary movement and outlined some of the recent activities of the Communist Party USA and the Young Communist League.

According to Lynch’s contribution to the Communist Party USA website:

“The Young Communists of the United States of America salute you in this time of revolutionary change and resistance! This particular gathering of the 20th general assembly of the World Federation of Democratic Youth in Cyprus is taking place precisely at a time that the youth of the United States of America, like in many other parts of the capitalist world, are facing a crisis. American capitalism has been intensified over the past three years as a result of the neo-fascist, anti-immigrant, anti-labor, and anti-people policies of the Trump administration.

“For the past three years, our organization has stood firm against the policies of Trump and worked alongside young workers and students in the resistance who are growing more and more frustrated with the political situation and are looking for revolutionary alternatives.

“In the midst of this year’s strike wave led by teacher and autoworker unions, our organization joined the picket lines and offered solidarity and support. …

“Our organization rallied with the masses of young workers and students for the international Youth Climate Strike in which we condemned global capitalism’s neglect to put people and planet before corporate profits.”

According to Lynch, the Young Communist League is using Democrats’ impeachment hearings against Trump to further ramp up propaganda against the president:

“The U.S. has entered a new political moment. The fight against the Trump administration is now centered on the impeachment hearings. Young Communists are working for what we call a ‘workers’/people’s and youth impeachment.’ On campuses and in workplaces all over the country, young people are taking a stand against Trump by holding up banners at football games, stopping traffic, kneeling during the National Anthem, and so forth.”

Lynch, like most American communists, is a Democratic Party supporter. Speaking to his international comrades, he emphasized the importance of the Party’s seemingly permanent shift to the far left and its role in radicalizing more American youth—all with an admirable flexibility with the truth:

“Inspired by Bernie Sanders’ 2016 presidential campaign, our country’s youth flocked to the polls a year ago to back candidates like Alexandria Ocasio-Cortez, Ilhan Omar, Ayanna Pressley, and Rashida Tlaib: women of color who pose a threat to Trump’s racist, anti-labor domestic policies and his imperialistic foreign policy to the point where they themselves, progressive Democrats, were red-baited this past July by being called ‘communists’ and were later met with threats of deportation by Trump himself.

“Progressive candidacies like these have motivated U.S. youth to search for more revolutionary and socialist alternatives to capitalism on the Left, which often brings them to the ranks of our organization. It is estimated by recent polls that as much as 40% or more of the U.S. millennial population believe that some form of socialism is better than the system we have right now. This number grows each day as youth realize that we need more than a temporary bandage on our problems both domestically and internationally. The march to the ballot box began last year, which resulted in the biggest defeat of the GOP in recent U.S. history, and is continuing.”

Founded in 1945, WFDY was for many years run as the Soviet Union’s main international youth front organization. After several lean years following the collapse of the Soviet Union, WFDY is on the rebound.

Every three or four years, WFDY convenes a World Festival of Youth and Students. The last gathering was held in October 2017 in Sochi, Russia, and attracted more than 30,000 young communists from all over the world to mark the 100th anniversary of the Bolshevik Revolution.

WFDY was one of the first organizations granted general consultative status with the U.N. Economic and Social Council, and also enjoys operational relations with UNESCO.

Lynch rounded off his speech to the WFDY comrades with a rousing call to arms:

“Our organization will continue to seek the broadest unity possible to take down Trump, the extreme right, and all the other reactionary neo-Nazi and Ku Klux Klan—like forces that fuel their fires of hatred and division. We will continue to combat Trump’s imperialist policies against Cuba, Venezuela, Bolivia, and others.

“We will fight within the belly of the beast and never abandon our international comrades in their struggles, which are our struggles as well. We have a long road ahead of us, but we shall overcome! Long live socialism, long live international solidarity, and long live WFDY!”

Is Lynch advocating giving “aid and comfort” to enemies of the United States? Surely not—that’s illegal. Shame on me.

Photo credit: A view of Nicosia, Cyprus, in February 2008. The city hosted the 20th Conference of the World Federation of Democratic Youth during the first week of December 2019. By TomasNY, via Wikimedia Commons