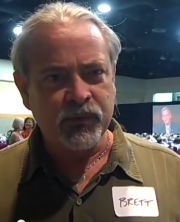 Donald Trump has gotten popular, in part, by challenging the media. But he has praised journalists on occasion. His 2011 book, Time to Get Tough, said David Gregory was “doing a fine job filling some awfully big shoes over at Meet the Press.” It was a reference to legendary and highly respected host Tim Russert, who had passed away.

So-called “Sleepy Eyes Chuck Todd,” who replaced Gregory, is a favorite Trump target. “The thing I find most offensive about Chuck Todd is the fact that he pretends to be an objective journalist,” Trump writes, “when in reality the guy is a partisan hack.”

In many ways, as Trump said, David Gregory was doing a fine job. Some of the criticism of Gregory’s performance as “Meet the Press” host missed the mark, such as when he interviewed Edward Snowden collaborator Glenn Greenwald. As we noted at the time, some in the media were aghast that Gregory asked Greenwald a perfectly reasonable question on “Meet the Press:” “To the extent that you have aided and abetted Snowden, even in his current movements, why shouldn’t you, Mr. Greenwald, be charged with a crime?”

Snowden, the NSA leaker, has been charged with espionage and still resides in Russia.

In his book, Trump takes on Jon Stewart, the host of “The Daily Show” on the Comedy Central network who is quitting after years of service to President Obama and the liberal-left. Stewart’s strategy is spewing curse words and invective toward conservatives and Republicans.

Trump recognized Stewart as Obama’s tool before it was recently revealed that Stewart was secretly meeting with people in the Obama White House, including President Obama, in efforts “by the president and his communications team to tap into Mr. Stewart’s influence with younger voters,” as The New York Times put it.

“I actually enjoy the guy,” Trump’s book says of Stewart, “but when he did a segment mocking presidential candidate Herman Cain, and used a very racist and degrading tone that was insulting to the African American community, did he get booted off the air like Don Imus? No. Where was the Reverend Jesse Jackson? Where was the Reverend Al Sharpton? Where was Sleepy Eyes Chuck Todd to provide hard-hitting journalistic ‘analysis?’ Nowhere. Stewart should have lost his job—at least temporarily. But he didn’t and he won’t because liberals in the media always get a free pass, no matter how bad their behavior.”

In other comments in his book, Trump discussed the journalists “who are obsessed with protecting Obama,” noting that ABC’s George Stephanopoulos is among the “big Obama fans.” He added that “it was incredible to see how overprotective reporters got toward Obama when I simply said what everyone in America was thinking: ‘Where’s the birth certificate?’”

While he praises Fox News and Roger Ailes, the executive behind the popular channel, Trump faults the “disappointing behavior by people in the press” which “occurs on both sides of the aisle,” and singles out Charles Krauthammer of Fox News for special criticism. Trump said Krauthammer had attacked him on the air as a joke candidate, and that he was not given any rebuttal time.

Discussing a speech he gave to Republicans, during which he had used “strong language,” Trump admits, “I’m not a big curser but it did take place” and the controversial remarks were reported by the media. But Trump counters: “Of course, Joe Biden dropped the f-word in front of the entire media on a stage with the president. But Biden gets a pass because he’s with Obama, and as we all know, Obama can do no wrong in the media’s eyes.”

Other quotable comments from his book include the observation that The New York Times is Obama’s “favorite newspaper,” and that “The press constantly maligns, ridicules, and mocks the Tea Party folks.”

During the current campaign, Trump has not shied away from putting reporters on the spot.

After The Wall Street Journal attacked Trump and his conservative supporters in the media, the businessman responded by saying the paper had a “dwindling” readership and “is worth about one-tenth of what it was purchased for…”

After Bill Kristol of The Weekly Standard said he was “finished” with Trump, he responded, “Bill, your small and slightly failing magazine will be a giant success when you finally back Trump.”

Fox News media reporter Howard Kurtz notes, “Look, Trump thrives on being attacked. He’s a great counterpuncher. He particularly relishes doing battle with the media. And this latest story hands him a big fat gift to do just that.”

That “latest story” was in The Daily Beast and concerned some allegations about alleged marital rape from Trump’s divorce proceedings. Trump’s ex-wife Ivana responded, “I have recently read some comments attributed to me from nearly 30 years ago at a time of very high tension during my divorce from Donald. The story is totally without merit.”

She added, “Donald and I are the best of friends and together have raised three children that we love and are very proud of. I have nothing but fondness for Donald and wish him the best of luck on his campaign.”

Since then, a story has surfaced about Trump criticizing an opposing attorney who wanted to breast-pump in front of him. Trump told CNN he may have said to her that it was “disgusting.” He added, “Bottom line. I beat her.” He said the judge had even awarded him legal fees.

For turning the tables on the media, Trump deserves the praise of those who are sick and tired of the liberal media setting the national agenda and demonizing conservatives.

I have a feeling that the Donald Trump hit parade will continue.