According to their tax returns, it turns out that essentially all of the Clinton family’s “charitable donations” were directed back to their own “charities”.

As TaxProf notes, the family’s charitable giving from 2007 onward has been a case study in moving money around. Since 2007, the Clintons “made $15 million (10.8 percent of their AGI) of charitable contributions, $14.9 million of which went to the Clinton Family Foundation and the Clinton Global Initiative.”

That leaves $100,000 for charitable uses that don’t directly involve the Clinton family and their globalist friends.

As a reminder, in April I created a chart illustrating where the Clinton Global Graft Initiative’s various expenditures went. It’s equally amusing.

Louis Farrakhan, “We Must Rise Up & Kill Those Who Kill Us” [Video] 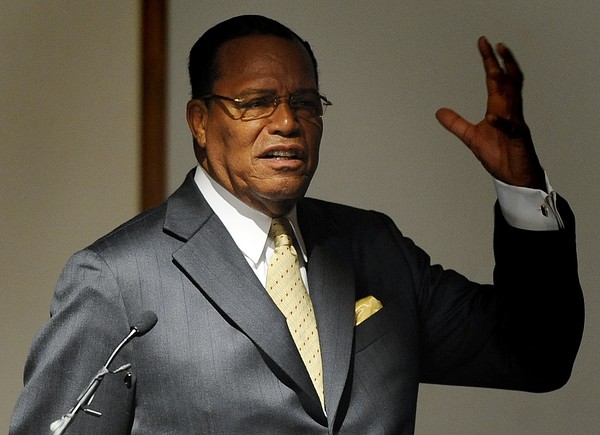 Louis Farrakhan is at it again… calling for civil unrest and the murder of all whites. No matter how many times he screams for violence from the pulpit, the media just yawns and he is mostly ignored. Except for the 50,000 or so who follow the Nation of Islam and Louis Farrakhan. They are listening very closely and preparing – for war. Late last month, Farrakhan called for blacks to “rise up” and “kill those who kill us” if the federal government fails to “intercede in our affairs.” In other words, if Obama doesn’t step up moving forward towards a race war, the Nation of Islam will do it for him. Farrakhan delivered his calls for an uprising on July 30th in a speech given at Mt. Zion Baptist Church in Miami. Shame on the Baptists for letting this vile race monger preach evil from their church.

“The Koran teaches persecution is worse than slaughter. Then it says, retaliation is prescribed in matters of the slain. Retaliation is a prescription from God to calm the breaths of those whose children have been slain,” Farrakhan intoned. “So if the federal government will not intercede in our affairs, then we must rise up and kill those who kill us. Stalk them and kill them and let them feel the pain of death that we are feeling,” he thundered.

Notice how they applaud this man. The congregants smile and cheer his racist, murderous words. They embrace his vile, hateful speech. Why isn’t the government looking into this incitement to violence? It is a call to slaughter white Americans and revolt. And the crowd went wild for it. Comments were all over the place stating that people would rather die fighting the white man than see black brothers and sisters die at the hands of white supremacy. May I just say, huh? Blacks are not being rounded up and murdered in the streets. Not by cops or anyone else. This is a false, wicked narrative that justifies a race war and it is gathering steam out there.

This video was on Farrakhan’s Facebook page. He included the lovely hashtag: “#JusticeOrElse.” Next month in DC, he’ll be rallying the troops in a demonstration that is meant to commemorate the 20th anniversary of his 1995 Million Man March. It should be filled with hate and possibly violence as Farrakhan brings his words and threats to life. Or should I say, ‘death.’ I consider Farrakhan to be a racist and a terrorist. The Nation of Islam is a terrorist organization as well. This is par for the course for the Religion of Peace.

Don’t let Farrakhan’s age of 82 make you think he is passe and weak. He’s anything but that and when he delivers one of his fiery speeches he commands huge numbers of acolytes who are more than willing to kill for their cause. He’s a dangerous snake. When Farrakhan calls for “10,000 fearless men who say death is sweeter than continued life under tyranny,” he’s got them lining up and volunteering in the aisles. “Death is sweeter than to continue to live and bury our children while white folks give the killer hamburgers. Death is sweeter than watching us slaughter each other to the joy of a 400-year-old enemy,” the radical orator told the faithful.

Close at hand to Farrakhan was Carlos Muhammad who leads the Baltimore chapter of the Nation of Islam. He is a devoted disciple of the minister of hate. Remember that the Nation of Islam also crashes press conferences and shows up in the guise of guarding others from violence and offers to take care of them. Much like the mafia would. They were right there with Baltimore Mayor Stephanie Rawlings-Blake in April following the first day of rioting in Baltimore after the death of Freddie Gray. That was no coincidence or accident. It was by coordination and design.

Following the Dylan Storm Roof murders in Charleston, South Carolina there have been confrontations between the New Black Panthers and the KKK. Then a black man who defended the Confederate flag was forced off the road and killed by members of a group of men that I would bet money on belonging to the New Black Panthers or the Nation of Islam. Between incidents like these and every time there is the death of a black individual that involves a police officer, racial tensions are ratcheting up more and more every day.

“If we are denied what rightfully belongs to us then there has to be unified action that we take that will force the justice that we seek.” − The Honorable Minister Louis Farrakhan

As James Simpson put it in a comment on Farrakhan’s incitement, this is agitation and provocation, not speech.

Farrakhan is a master strategist and orator. It was not by chance that he chose Mt. Zion Baptist Church to give his furnace blast of a speech and a call to arms. This church has served as a meeting place for the Rev. Martin Luther King Jr. and other civil rights leaders. The church was packed and several dozen couldn’t get in because it was filled to capacity. They lined up around the block to get in.

From the Miami Herald:

Two decades after the historic march in Washington, D.C., a rally will be held on the mall on Oct. 10. According to the Washington Post, leaders across the country are coordinating an effort to attend the event. This time organizers hope to attract a diverse cross-section of people, including Native and Hispanic Americans, to a rally that is being promoted with the hashtag #JusticeOrElse on social media.

According to the Twitter feed of Brother Jesse Muhammad, a blogger and member of the Nation of Islam who attended Thursday night’s gathering, Farrakhan spoke about respect for women, religion and race relations in America. Journalists from mainstream media outlets such as the Miami Herald, WLRN-FM, CBS 4 and others were not allowed into the church for the event.

“Every time they kill a black man, beat a black woman, we’re being radicalized,” Muhammad quoted Farrakhan as saying.

Farrakhan said it was necessary to return to the site of the Million Man March to demand justice.

“We want to go back to Washington to demand from the government what we have paid for with our sweat and blood,” he said.

Farrakhan called for the Million Man March in 1995, when hundreds of thousands of African American men descended on the National Mall for one of the largest gatherings in U.S. history. The theme of the march was to promote family values and dedication to the community among black men. Men from an array of backgrounds and classes attended the historic march.

As the leader of the Nation of Islam and a prominent public figure, 82-year-old Farrakhan is noted for his outspoken commentary on social and political issues. In June, he announced the October rally at Metropolitan African Methodist Episcopal Church in Washington, D.C., where he pointed to recent police shootings and the mass killing at a church in South Carolina while criticizing race relations in America.

“Yes, all lives matter, but the only reason you’re here is because black lives are being slaughtered,” Farrakhan said to the crowd on June 24, according to the Associated Press.

Louis Farrakhan hates America and he hates white people. He’s also a virulent antisemite. He hates the police, our laws and our Constitution. He is promoting a full blown race war and wholesale murder. Americans are the enemy to him: “Who are we fighting today? It’s the people that carry the American flag,” Farrakhan continued. “What flag do the police have? What flag flies over the non-Justice Department? What flag flies over the White House?” This is a man who demands Shariah Law. A man who would subjugate America to radical Islam and eradicate the white population. He is absolutely evil and as his final act on this earth, he may just bring full scale civil war if he gets his way.

Barack Obama has dined and hung out with Farrakhan. Here’s a relevant quote from the minister:

“The cracker don’t have no authority over me”

“I’m a guided man, and Allah has blessed me to get you this far”

“Since i’ve been on this tour, I’ve been telling the people – that God wants to give you the promised land”

“I can never forget Iran – Iran has beautiful Muslims. You don’t know how much our Muslim world is anxious to see the enemy handcuffed. …the enemy – the British and the Americans have created all of that havoc in the Islamic world. And imagine us rising up in America at a time.

Sounds like he has a lot in common with Obama, doesn’t it? Between racism, Iran and an overwhelming hatred of America, they could be brothers.

It’s funny… Christian pastors can quietly and strongly stand for their freedom of religion and traditional marriage, and they are denounced and pilloried for it. But if you let a black Muslim minister call for the death of all whites in America, no one seems to care or notice. The leader of the largest Muslim movement in America is openly calling for a race war and we hear next to nothing about it in the media. I imagine we soon will – it’s Farrakhan’s legacy and parting gift to America that I worry about.